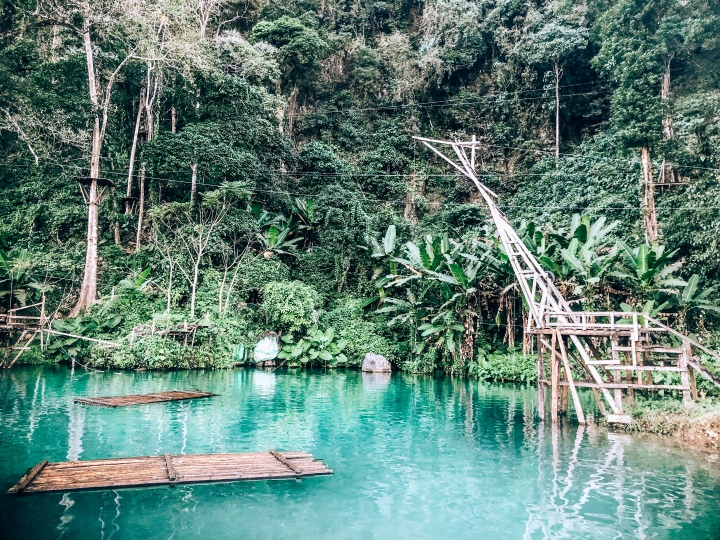 Once we’ve recovered from our Christmas celebrations, we decide to finally do some of the sightseeing around Vang Vieng. Took us long enough.

Former-party-town-turned-outdoor-adventure-destination, Vang Vieng has various caves, waterfalls, viewpoints and lagoons that you can visit. Following recommendations from friends, we decided to head to the blue lagoons and Tham Phu Kham Cave.

“If you can though, get one of those desert buggies. Don’t get a motorbike, trust me.”

At first, we were not on board. After all, renting two buggies at around 100,000 kip an hour (10 euros, but when you’re on a budget it’s all relative) is a bit steep when you compare it to getting a motorbikes. But with the warnings of bad roads and massive potholes ringing in our ears, we decided to bite the bullet.

After a lot of discussing, haggling and being sent from one rental place to the next, we were set. Three people, two buggies, face masks and we’re ready to go.

“Oh and by the way guys, we need to not crash these. The rental contract says they’re not insured so if we trash them, it’ll cost us $10,000.”

We’ve become good listeners by now and so decide to also follow our friend’s recommendation of which lagoons to do first and which to save for last. Blue Lagoon 1 and Tham Phu Kham cave, followed by Blue Lagoon 3 and finally Blue Lagoon 2.

Having breezed past the first lagoon due to the large number of people there, the ride to (and experience at) Blue Lagoon 3 was honestly the highlight for me.

As we ride along, leaving paved roads for dirt ones, substituting smooth surfaces for tracks with more holes than a slice of Swiss cheese, I suddenly understand the buggy recommendation. As scooters and motorbikes slowly weave around the potholes – left, right, left, right –  we soar over them, putting the suspension to the test.

We drive through small towns and past farmlands. All around us, lime karsts rise up into the sky. Cows amble past us, the trees that line the road are brown. Strange, I note, that these trees seem dead and yet there is so much vegetation around us. A moment later I realize that my friend and I have been thinking the same thing, because “holy shit,” he says. “Look at the line on the trees!”

I look more closely and see that while the bottoms of the trees are indeed the same rusty brown as the road, when you look toward the tops, the leaves are green. Somewhere midway, there is a line where the dust from passing traffic does not rise higher. These trees are very much alive, they’re just covered in the thickest layer of dust.

We pass a school where children have just gotten out of class. They clamber onto bicycles and begin their ride home. Others climb into the back of a truck. As the truck roars past the bicycles (and us), the children cover their faces from the dust.

We reach Lagoon 3 and it is an absolute oasis. Now this is more like it. I find myself staring at yet another hue of blue that my mind cannot compute. I sift through a crayon box of memories, wondering whether anything I’ve ever seen could possibly match this. It doesn’t, and you are a lucky girl.

I dive in headfirst.

We spend some time swimming around. I watch the guys swing from ropes, doing back flips into the water. I float on my back, listening to people’s laughter as a few back flips turn into belly flops. I stare up at the sky. It’s getting to be sunset. Beautiful, but we should move. I never said time management was our forte.

We begrudgingly pack up our dirty things. We muse that we could spend an entire day here. But we can’t. We are racing the setting sun and the deadline for us to return our buggies. Off we go.

Two buggies and three people means that one person has to drive solo, with the other two partnering up. Thus far, I had partnered up. But now: “okay Nicole, your turn to ride solo.” Welp. Really? I suddenly don’t feel all that badass anymore.

Before I have much of a chance to kick up a fuss, though, the guys get the buggy’s engine started for me – this one was having some engine trouble, of course – and pile into the other one, leaving me with one last “you’re not scared are you?”

Fuck. They know me too well. I rev the engine and get her moving.

I’m second in our caravan of two now and as we race to our destination, I’m quite literally eating dust. I’m suddenly grateful for the pink surgical mask that covers my mouth and nose. I pass people on bicycles covering their mouths, children on the side of the road covering their eyes. I catch the disapproving stares of several adults. Or am I imagining it?

As I drive through these dusty towns, following the billowing cloud our buggies leave in their wake, I begin to feel a certain shame settle in.

I find myself wondering, if you asked the inhabitants of these towns what they think of buggies, tuk tuks and tourists, what would they say?

More importantly, I wonder whether anyone has ever asked.

I begin to wonder, as I often do, about the impact that tourism has on places like these. Places like a town tucked between the lime karsts of Laos, whose community has been irrevocably changed.

I recognize there isn’t anything I can do about my presence on this dirt road right now. I do decide, however, to slow down. I make a voice note in which I describe my feelings. Don’t forget this part, I tell myself.

We reach Blue Lagoon 2 and race inside. “15 minutes until they close!” It’s getting darker; the breeze is colder. We are going to freeze on the drive home if we go swimming, and yet I am already depositing my clothes on the nearest chair and figuring out the best spot to enter the water.

There’s a platform alongside the lagoon, and two people stand on top, debating whether to jump. We cheer them on and clamber out to climb to the top ourselves.

One! The first guy jumps in. Two! Three! My friends jump in.

It’s just me and another girl now. “I’ve been up here for twenty minutes, I just don’t dare to do it.”

I take two steps toward the edge. I stand on top of the platform and look down at the water below. Maybe electric blue is how I would describe it. I look ahead at the mountains before me. They’re wrapped in a blue haze of their own. Huh. Do mountains always look that blue? I look down at the guys in the water. It suddenly seems so high up here.

A sharp inhale, my voice saying “oh!” and I’m free falling into the blue.

2 thoughts on “Buggying in VV”