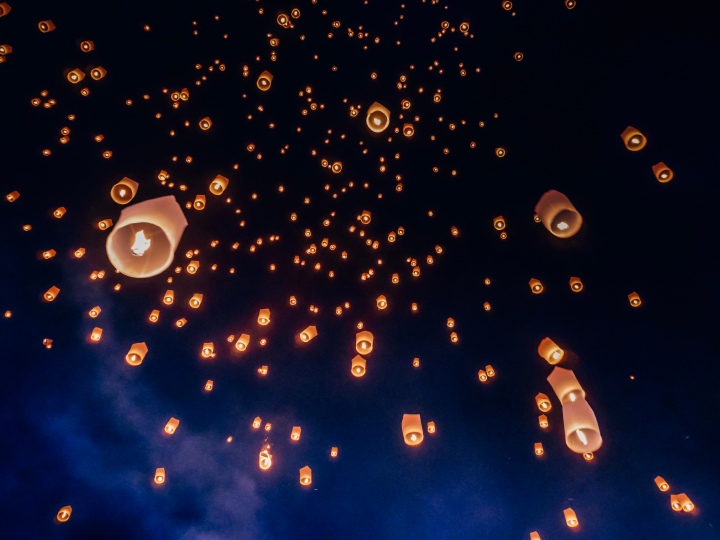 About seven or eight years ago, long before I really began planning a trip to Southeast Asia, long before the things that got me here would happen, I saw a photo of twinkling lanterns in the sky.

I can’t recall whether it was on Facebook or Google. I can’t remember whether it was Instagram or Pinterest -or whether I even had those back then. What I do remember is seeing it. Thousands of specks in the sky, and me wondering: “where is that? I must see it one day.”

I looked it up at the time and found that it was a festival in northern Thailand. I took care to remember that. I told myself that when the day came that I would venture into Southeast Asia, I had to see the lanterns.

Years later, when I began actually planning my trip, I remembered the photo; remembered that I had to see it. I looked it up and found that in 2018 the Yee Peng lantern festival would coincide with the Loy Krathong festival, both taking place in Chiang Mai from November 20 – November 23rd. Cool, so that’s where we’ll be then.

You may remember that my initial plan was to leave Amsterdam in September, but that I delayed the trip by a few months. This series of events meant that my trip would now actually begin with celebrating Yee Peng.

I didn’t realize until I stood on that field, surrounded by light, just how perfect that would be.

We piled into one of many red trucks with an open back – the same red trucks you will see zipping all over the city, dropping people off at their different destinations – and drove about 30 minutes out of the city. The festival was spread across a massive grass field. There were lanterns and candles everywhere. And food; so much food.

Once the event started, we were ushered into our seats in the most chaotically organized chaos – yes, that’s chaos twice. It’s necessary. As we sat we watched traditional dances. We also saw monks in prayer. All the while, however, you could feel the excitement brewing. In the distance, you could see the twinkling lights of another mass release.

Finally, it was time. Lanterns were handed out; the air thick with excitement.

Now the tricky part. How do you begin putting into words something that is so beautiful that even your eyes can barely process it in its entirety? How can you describe the feeling? I’m likely setting myself up for failure here and yet I want to, even in a small way, impress the beauty of this evening upon you.

The sounds. The host’s voice over the speaker, asking – no, begging –  us to please release the lanterns at the same time. “So we can all share a special moment! Pleaaaaaaase!” Our laughter at his sweet dedication to creating a perfect moment. Our laughter also at the nerves of having to light a paper lantern in close proximity to so many other bodies. Aren’t we going to catch each other on fire? The music, traditional sounds the likes of which I’ve only ever heard in their dramatized form in a Hollywood film.

The smells. The smell of oil from the wooden lanterns we were to use to light our paper lanterns. The smell of grass and dirt. A smokiness in the air.

The sights. 4,000 people. 4,000 people in a tight ring. A temple-like structure in the center. Lanterns alight and filling with air. Lanterns bobbing up. Big for a moment, then suddenly so small as they gain height. Lanterns in a slowly swirling spire, practically a stairway to the heavens.

Once they are far away, they look like thousands of fireflies.

The release of lanterns during Yee Peng symbolizes letting go of all ills and misfortunes in the previous year.

I wasn’t entirely sure of that when I first arrived in Chiang Mai. I asked around but it seemed none of my fellow travelers were sure either.  But out there, on that field, surrounded by 4,000 people, I received my confirmation.

And so I did. At the juncture of this great new beginning, I did just as he asked. I stood on that field in the hills of Chiang Mai and with the help of new friends, I lit my lantern.

And I let her fly.

In case you’re interested in experiencing the festival yourself one day (which I would certainly recommend), here’s some more information about that.

Lanterns are released all across the city of Chiang Mai, but there are a few events at which you will be able to experience a mass release like this one. These are events you have to pay for, so it’s really up to you and your budget.

The event I attended was the CAD Khom Loi Festival located at the Cowboy Army Riding Club. I got my ticket via PM Tours. They were incredibly quick and oh – so helpful. If you find yourself struggling to make sense of the different events and aren’t sure what you should attend, also feel free to reach out! I’m happy to help.